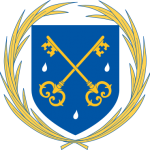 Home l About Us l New to the Latin Mass

Is This Your First Time to Saint Joseph and the Traditional Latin Mass? 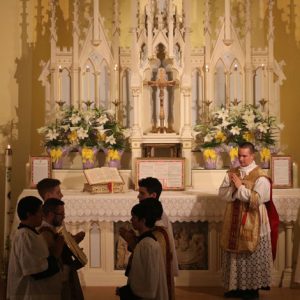 You are not alone! All over the globe people are discovering the treasure that has been at the heart of the Catholic Liturgy since the first century. Do not feel out of place if you are not familiar with Latin (you will see most people reading a translation) or if the actions at the altar look different—this same Mass was known by Roman Catholics around the world for centuries!

In 1963, the bishops attending the Second Vatican Council (1962-1965) approved the idea of revising the Mass that had been said for centuries all around the world. The result was a new way of saying the Mass, called the “Novus Ordo” (“new order”), that became the norm. But in 1984, Pope Saint John Paul II encouraged the continuation of the older way, and in 2007, his successor, Pope Benedict XVI, issued a motu proprio (a type of papal edict) called Summorum Pontificum, giving every priest the authority to say the old Mass, even without permission from his bishop. In that edict, Pope Benedict gave the “Novus Ordo” the name “Ordinary Form” and the old Mass the name “Extraordinary Form”—though it is also known as the “Traditional Latin Mass” (TLM), the Latin “Usus Antiquior,” the “Tridentine Mass,” and the “Rite of St. Gregory.”

The parishioners and priests at St. Joseph are friendly and welcoming, so feel free to ask questions about the Catholic faith as well as elements of the Latin Mass that may be confusing or different from your regular Mass experience.

Some Helpful Tips for Those Visiting St. Joseph for the First Time

Transitioning from the Mundane to the Supernatural 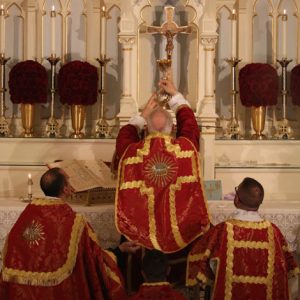 When you first walk in the doors of St. Joseph, you will notice a respectful “Sacred Silence” that will ease your transition from the mundane to the supernatural. This is certainly not “unfriendliness” but rather a desire to show the greatest respect in the House of God and to Christ’s presence in the Tabernacle. Arriving a few minutes early is always a good idea. Doing so will give you the opportunity to pray the Rosary, offered before all Masses.

You will notice an air of prayerfulness and silence as parishioners recollect themselves for assisting at the holy sacrifice of the Mass. There is a "cry room" available in St. Joseph's Hall (a.k.a. the basement), with audio and video feed of the Mass.

Many women cover their heads while in church, either with a lace mantilla or chapel veil, or with a hat, which is the normal practice for the traditional Liturgy. Like the Tabernacle, a woman is traditionally veiled in church. This practice shows the holiness and dignity of womanhood, and indicates respect, honor, and protection for that which is precious.

Women also wear skirts of a modest length, below the knee, and tops that are not sheer, tight, or cut low in the neckline. If possible, men and boys wear clean, pressed shirts, often with ties and jackets, as well as slacks and dress shoes. The parishioners truly exemplify the phrase “Sunday Best."

Confession: Preparing the Soul for the Reception of Christ in Communion

To receive Christ worthily in the Holy Eucharist, one must be a baptized Catholic in a state of grace. At Saint Joseph, priests are available to hear confession at least 30 minutes before every Mass, on Sundays as well as daily Masses, and after Masses as needed. Lines form outside the confessional, along the wall on Mary's side of the altar, located at the back of the church. If you need to go to confession after Mass, please wait in the last pew or along the wall.

The Confessional at Saint Joseph

Going to confession at St. Joseph may remind one of something he has seen in the movies—“booths,” kneelers, and a screen of anonymity between you and the priest.

Although the penitent confesses in English (or other vernacular language), the priest will say the prayers of absolution in Latin.

Walking in the Door at St. Joseph

The Postures of the Priest

Receiving Communion on the Tongue

The Differences Between Low Masses and Sung Masses 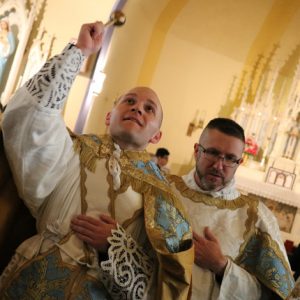 In the Extraordinary Form, there are two primary types of Masses celebrated: the spoken or “Low” Mass, and the “Sung” Mass (sometimes referred to as High Mass or, in Latin, Missa Cantata).

Low Mass is celebrated by a priest assisted by one or more altar servers. The prayers are spoken in Latin, and much of the Mass of the Faithful (after the Offertory) is almost inaudible, in imitation of the ancient Jewish liturgies given by God to Moses, and emphasizing the fact that we are faced with a profound mystery.

During Low Mass, only the altar servers respond to the priest. The priest alone says the Pater Noster prayer (Our Father), and only he assumes the Orans prayer position (hands extended and held shoulder-width apart).

Sung Mass is normally celebrated once a week, at 11:00 a.m. on Sundays, as well as First Fridays, Holy Days of Obligation, and other special feasts throughout the year. Sung Mass includes the Asperges before Mass, in which the priest sprinkles the congregation with Holy Water as part of the opening liturgical ceremony. Sung Mass is so called because many of the prayers of the Mass are sung by the priest, choir, or schola. Sung Mass also usually employs the use of incense.

At Sung Mass, the faithful chant the Kyrie, Gloria, Credo, Sanctus, and Agnus Dei with the Schola (choir). The congregation also responds to the Priest in chant during multiple points during the Mass.

Solemn Mass (also known as a Solemn High Mass), a type of Sung Mass, is the full ceremonial form of the Tridentine Mass, celebrated by a priest with a deacon and a subdeacon, requiring most of the parts of the Mass to be sung, and the use of incense. The parts assigned to the deacon and subdeacon are often done by priests in vestments proper to those roles.

Portions of this information courtesy of Wikipedia 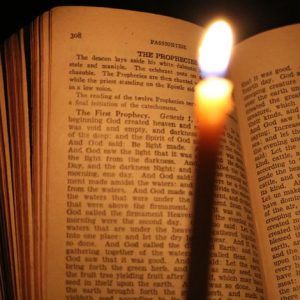 Each pew contains multiple copies of missalette booklets. These booklets contain the common texts of the Mass in both English and Latin. The Propers for the Sunday Mass liturgy (the Gospel reading, etc.) can be found in the bulletin. The “Propers” are those prayers and readings that vary from one Mass to another. They are the:

The Propers in the blue missalettes are for Trinity Sunday only; the Propers for other Sundays are in the bulletin. (Propers for daily Masses are in individuals’ missals.)

As the priest offers the prayers of the Mass, do not be worried if you have problems following the Latin or keeping up with the priest in the missal. St. Pio recommends during the Mass to “keep your mind focused on the mystery that is unfolding before your eyes. In your mind’s eye transport yourself to Calvary and meditate on the Victim who offers Himself to Divine Justice, paying the price of your redemption.”

The Postures of the Priest During the Extraordyinary Form Mass 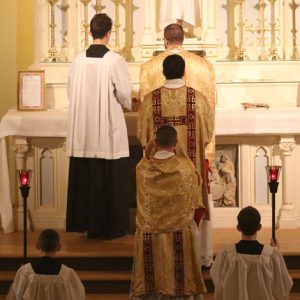 In addition to translations for the liturgy, the missalettes available in every pew at Saint Joseph explain many of the actions of the priests that are done differently from Masses said in the Ordinary Form.

For example, in the Extraordinary Form, the priest appears to be facing away from the congregation during Mass.

The priest is facing "Liturgical East" with you. This is because of a long-standing tradition heavily rooted in Scripture that tells us Christ will come again from the East. The Priest, as Alter Christus (another Christ), leads the people, all facing the same direction, in the supreme act of worship: the representation to the Father of the Sacrifice of the Son through the power of the Holy Spirit. The priest does not give us his back; instead he humbly offers sacrifice and stands before God on our behalf.

In the celebration of the Mass in the Extraordinary Form, the priest uses three tones of voice (low, medium, and high). The low voice is used, for example, during the prayers surrounding the Consecration and the Consecration itself, as the priest quietly prays the words of Consecration, in which the bread and wine are transubstantiated into the Body, Blood, Soul, and Divinity of Christ.

The medium voice is used by the priest at the altar to be heard by the sacred ministers and servers who are near the altar. The high voice is employed to give the texts of the Mass that are heard by all.

It is, therefore, well to follow along in the hand missal so that one might meditate upon the prayers of the Mass. The silence experienced during the Canons of the Mass is a hushed awe in which the faithful render thanksgiving unto the Father for the mystery of Christ’s supreme sacrifice made present again on the altar.

When newcomers attend the Mass in the Extraordinary Form for the first time, they are, moreover, surprised that the most important part of the Mass is accomplished in silence. Through the silence of Mass, we enter into a contemplative and sacred silence, over which the Holy Ghost is hovering. This anointed silence in the Traditional Latin Mass is a timeless silence pointing to eternity.

Portions of this information courtesy of SanctaMissa.org

Receiving Communion on the Tongue at the Altar Rail 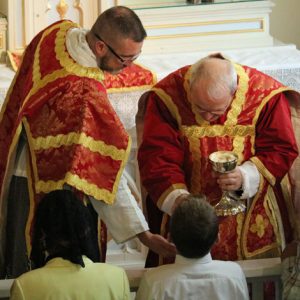 Communion at St. Joseph is received kneeling at the altar rails, and on the tongue, not in the hand. As the priest administers Holy Communion, he will say “Corpus Domini Nostri Jesu Christi custodiat animam tuam in vitam aeternam, Amen,” which in English means “May the Body of our Lord Jesus Christ preserve your soul unto life everlasting. Amen.” Because the priest says “Amen,” there is no need to respond to him as you await reception of the Sacrament.

As some people may be unfamiliar with reception of communion on the tongue, here are some helpful tips:

After Low Mass, the priest will kneel at the stairs in front of the altar and pray the Leonine Prayers in English. These prayers are a set of prayers introduced by Pope Leo XIII in the early 1900s, and offered for the salvation of Russia. These can be found at the back of the missalette

“Know, O Christian, that the Mass is the holiest act of religion. You cannot do anything to glorify God more, nor profit your soul more, than by devoutly assisting at it, and assisting as often as possible.”